The Wisconsin Alliance of Artists and Craftspeople has named Haitian-born acrylic artist Gregory Frederic the Featured Artist of the 2018 Art Fair Off the Square in Madison,Wisconsin.

Frederic’s warm smile will greet visitors in the first booth of the show on Martin Luther King Boulevard.  His is one of 140 exhibitions that will be set up by Wisconsin artists and craftspeople  July 14th and 15th to show their art and crafts.
​
Gregory Frederic’s abstract vision of cats will be featured on postcards, posters, t-shirts and copy used to promote this year’s show.  His art is typically political or conceptual, but his featured work Purring Love was inspired by the three cats that “pounce around” in his studio.  According to Frederic, “They are often purring as if to say, paint me…paint me’ and one even chases my brush while I’m working.”
​
The Art Fair Off the Square, as well as the Winter Art Fair Off the Square, are put on by the Wisconsin Alliance of Artists and Craftspeople, LLC., (WAAC) which was
officially established in 1982 as a non-profit,  tax-exempt organization intended to promote the work of Wisconsin artists and craftspeople. 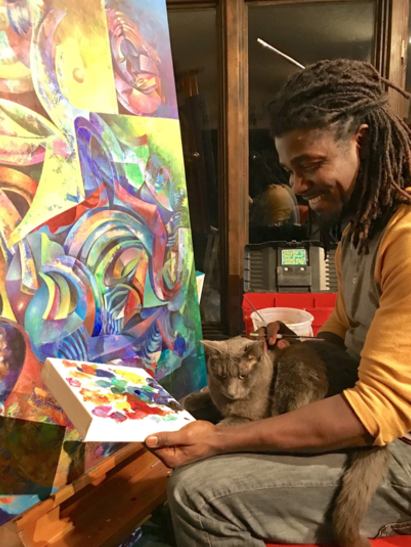 --He painted murals for the World Health Organization

--Among his many awards, Best Painter at last year’s Art Fair Off the Square

--He teaches both children and adults

--He travels throughout the state doing live painting